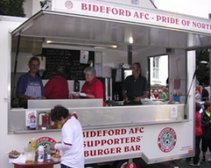 The Supporters club work in close tandem with the club, helping raise funds for the general upkeep and maintainance of the club. The funds and help they raise each week are vital to the club. Among other things, they host a weekly Golden Key draw, more information can be found here, and also run the supporters club burger bar and supporters club shop at each home match. The club carpark offering weekday parking is also managed by the supporters clubs, so come along and put those grey cells into action!

The burger bar sells a wide selection of hot food, soft drinks, tea and coffee at very reasonable prices with all profits going directly into improving the facilities of the club. The supporters club shop is run by Jean Beal selling replica shirts, scarfs, badges, etc and is open an hour before the game until kick off. All run voluntarily by the supporters club in thier spare time.

Supporters Club meetings are arranged to take place some time during the third week of the month, anyone is welcome along, but it is reccommended that you contact one of the above listed people for specific dates and times. If you would like to become part of the supporters club and help out your local team, all help is gratefully recieved, just pop along to one of our meetings or contact one of the members at a home match. You are not obliged to anything, if you can offer an hour a week or ten to help raise money for the upkeep of the club and ground.

We proud ourselves on having a dedicated Supporters Club, which without doubt is the best in the league, and appreciate the work they do to make matchdays as successful as they are.