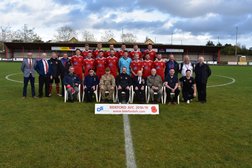 Bideford ended the season with a 3-1 win over Evesham United, their third straight victory which sees them finish in 9th place in the Division One South table.

The away side made a bright start and should’ve been ahead as early as the 6th minute when Adam Page raced through on goal but blazed his shot over the bar. Bideford responded just two minutes later by scoring the opening goal and never really looked back. Ryan Turner played the ball across to Billy Tucker in the box who mishit his first attempt but finished well past Andy Hannah with his second attempt at the back post. Turner charged towards goal from the left just before the half hour mark but was just wide with his shot and soon after forced a good save from Hannah with a low drive.

Like in the first half Evesham started the second period well but it was Bideford who found the back of the net in the 55th minute. Tucker’s corner was met by a towering header from James Mayne at the back post to put The Robins two ahead. Joe Moore made a smart save just past the hour to turn a Kane Simpson free kick around the post while at the other end Joel Randall bore down on goal but hit the side netting with his strike.

Simpson came close again for Evesham as he managed to squeeze an effort beyond Moore but Ben Palmer was on hand to clear off the line. The visitors did pull one back however in the 85th minute through an exquisite lob from Steve Davies but Bideford made the game safe just two minutes later. Mayne once again headed home from a Tucker corner to cap off a good ending to the campaign for The Robins.