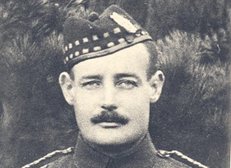 This Saturday, prior to the 1st XV match against Widnes, Park will commemorate the death of Park and England skipper Percy 'Toggie' Kendall.

Toggie served with the 10th (Scottish) battalion of the Kings Liverpool Regiment and fell in France on 25th January 1915.

A piper from the Regiment will be attending the match to play a lament prior to kick off.

The son of Mr. Francis Henry and Mrs Kendall of Rock Ferry and husband of Mrs. Katherine M. B. Kendall of Lower Bebington. He was born in 1878, educated at Ellway Prep. School, New Brighton, Tonbridge School and Trinity Hall Cambridge. He graduated with a BA in 1900.

He made his mark as an outstanding rugby player, playing for Blackheath, the Barbarians and his home club Birkenhead Park. He represented Cheshire on no less than 45 occasions, playing for the North in 1900, 1901, and 1903. Achieving full England international status v Scotland in 1901, v Wales in 1902 and was captain of the England team v Scotland in 1903.

In the prewar years he had served within the Liverpool Scottish as Colour Sergeant and despite his age and being the father of two children, did not hesitate to re-enlist within 12 hours of the outbreak of war.

He was commissioned on 14/10/14 and went to France with the first Liverpool Scottish contingent, sailing on ‘SS Maidan’ in November 1914. The manner of his death on 25/1/15 was particularly unfortunate.

Noel Chavasse describes it in a letter sent to his father, the Bishop of Liverpool; ‘he (Kendall) was in a safe part of a trench giving orders to a Cpl. When a bullet struck the branch of a tree above the trench and glanced down upon him. Three minutes later he was dead’.

He was buried in Kemmel Churchyard alongside fellow Liverpool Scots officer and skipper of the Scottish Rugby team Lt Fred 'Tanky' Harding Turner. 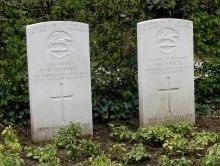 Thank you to Mike Gavin, Secretary of the Liverpool Scottish Officers Association.

Also heres a cracking article from the Rugby Paper: Let’s spare a thought for Toggie and Tanky
http://www.therugbypaper.co.uk/features/columnists/peter-jackson/13457/peter-jackson-lets-spare-a-thought-for-toggie-and-tanky/