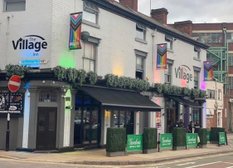 We are pleased to announce that the VIllage Inn are the sponsors for Birmingham Bulls 2021/22 season.

We are overjoyed to have the support from the Village, allowing us to remain in the centre of Birmingham’s LGBT community.
David Cumpston, Club Chair

The Birmingham Bulls have agreed a sponsorship deal with The Village Inn for the forthcoming season. The Village will take centre stage on the club’s new kit, and be the home to the Bulls after matches, on nights out, and for the club’s 10th birthday celebrations this year.

David Cumpston, Club Chair said "We are overjoyed to have the support from the Village, allowing us to remain in the centre of Birmingham’s LGBT community."

Editors Notes: The Village in is one of the longest established and most popular gay Bars in Birmingham’s gay village. At night The Village Inn transforms into the U.K.'s leading live cabaret venue presenting live shows 7 days a week

The Birmingham Bulls were founded in 2011 and play in the Greater Birmingham Merit league, as well a friendlies with other gay and inclusive rugby clubs across the country. They host the annual Touch My Brum touch rugby tournament, and in 2023 will be hosting The Union Cup,