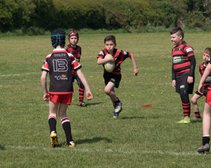 It was a very warm morning but despite this there was some excellent rugby from all three teams involved.

There was also a brilliant performance from the ever improving Alfie Davison. He collected the Man of the match from Emley for some outstanding tackle technique which saw him finish the game with 18 tackles and the added bonus of a try. He also collected a top tackler award from his own team.

The Most improved player however was Archie Walker. His all round performance was of the highest standard as he never stopped running for his team. This was shown in his return of 29 tackles as well as a haul of 6 tries.

Birstall Victoria had two man of the match awards. The first went to Harley Aston who continually found space in the oppositions line due to his fantastic footwork. He scored 3 wonderful tries but also managed to help his team defensively with 24 tackles.

Birstall second MOM award was for the ever impressive Max Grinhaff. Grinhaff displays strong running and tackling every week but it was his support play that made him stand out from the crowd. He finished the game with 20 tackles and an astounding 9 tries.
Magic Moment went to Jack Pickles for his constant offloading in the tackle and especially for a long pass to the wing that saw Grinhaff get over in the corner. He completed the game with 19 tackles and also scored the first try of the match.

There was also a very good performance by Birthday Boy Alfie Watson who danced his way through the opposition to score a pretty much full length try in the corner.