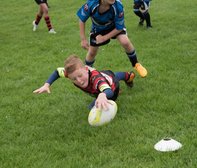 Birstall Victoria Under 8's welcomed both Emley and Leeds Underdogs to Whitelee fields on Sunday.

There was some excellent rugby from all the teams and lots of skills on show from everyone involved.

Max Grinhaff once again had a fantastic game and was given the opposition man of the match and also the man of the match from his own team. He contributed in both the attacking and defensive sets.

Most improved player went to Alfie Watson. He continually found a way to get through the oppositions defence and even when not scoring he gave his team a territorial advantage.

The 100% effort award went to Jack Kirkaldy. He was good in defence but it was his very strong running that won him the award. When driving in the ball the opposition more often than not got out of the way but if they didn't they rarely stopped him.

The final award went to Harrison Stevens. Week in week out he shows that although he may not be the biggest player on the field it doesn't matter if you have confidence and technique. This allowed him to pick up the top tackler award.

Other try scorers were Jack Pickles, Sam Whiteley, Charlie Orr and Archie Walker who all played some fantastic rugby.