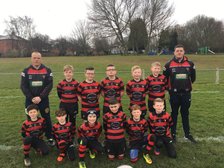 Birstall Victoria under 10’s welcomed the very impressive Normanton Knights to Whitelee playing fields on Saturday. It was a very tight game through the full 40 minutes with both sides playing some very impressive rugby despite the very heavy ground.
Joint opposition man of the match winners William Wilkinson and Harrison Stevens worked tirelessly in both attack and defence. Stevens led his team around the field from acting half back and was a constant threat from anywhere on the field. Wilkinson made a lot of Yards throughout the game but it was his impressive 23 tackles that really helped his team during the game. He was rightfully awarded with the top tackler and parents player of the match.
Coaches man of the match went to Cameron Charles who scored two tries from the wing for his team. He’d not scored before but definatley made up for it in this very tight game.
The conditions under foot meant that it was a game played mainly down the middle and there was a lot of work done by the big men. Coby Doyle, Caleb Rhodes and Harley Trapps drove there team forward at every opportunity and made some important ground. The two other forwards Jack Pickles and Max Grinhaff also made a lot of ground and were both rewarded with tries.
The forwards were backed up well by the backs Alfie Davison,Alfie Watson and Archie Walker who all excelled in attack and defence and worked really hard to keep the oppositions chances to a minimum. Harley Aston was a continual threat with the ball in hand but it was the full backs kicking on the last that opened up the oppositions defence on more than one occasion.
It was a very entertaining game which both coaches said they were looking forward to revisiting in the reverse fixture.
Share via
FacebookTwitter
https://www.pitchero.com/clubs
Recent news