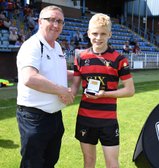 Birstall dominated from the start and spend the majority of the first 30 minutes in Fryston’s half, but great defence from the Warriors kept Birstall to only a 12 point lead at half-time.

MOM Joshua Beevers opened the scoring for the Vic and Kane Ellis and Reece Ripley also add points to their half time tally, all tries unconverted.

Soon after the start of the second half Fryston took advantage of a Birstall knock on 10 metres from their line, going over for their first try of the game but Birstall hit back in quick succession as Captain Robson Stevens crashed over the line for this first soon followed by a similar style Leon Grayshon try, both successfully converted this time by Harry Copley.

Fryston couldn’t get a foot hold in the game as every break they made was thwarted by excellent Vic defence. As confidence grew, more tries came for Birstall as both Stevens and Ripley added to their tally, both scoring a brace before the whistle. The score at fulltime was 34 – 4 to Birstall Victoria who are this years Under 15’s Yorkshire Junior League Continuation Cup Winners!