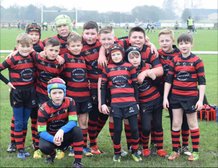 where both teams worked hard with good defence from birstall.

Dylan Rhodes had a good match back to his great standed earning him the top tackler award. Jack Mysak, kerry Annan and Liam Dawson had good spells of attack and defence with Marko Lambton, Mckenzie Jefferson and Bradley Render all ran well.
Cory Quince was given the 100% effort for some good runs, Jamie Richardson was given most improved and Harry Avis was awarded best opponent for his great runs.
Cameron Stevens upped his game with strong runs and good defence earning him the man of the match and was also given parents player of the match