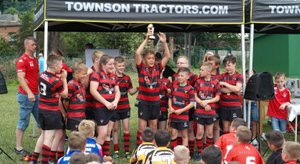 Coming up against five teams from West Yorkshire, throughout the day the side played some fantastic rugby and showed great teamwork.

The first game saw Birstall face Huddersfield St Josephs and they got off to a great start with a 7-1 victory. Tries were scored by Verne, Brandon (2), Joe, Finnley, Harry H and Billy.

Game two against Bortherton Bulldogs saw a victory of 6-2. Tries were scored by Harry A (2), Verne, Jack, Brandon and Harry H.

The third game against the hosts, Keighley Albion, was won 3-0 with Billy, Jack and Scarlett all crossing for tries.

The opposition in the fourth game was Drighlington and the game was won 3-1 with Harry A grabbing a Hat-Trick.

The final game, against Siddal, saw the side complete a fifth victory of the day by a scoreline of 3-2. Tries scored by Harry A (2) and Brandon.

After the games had concluded, the players were presented with Medals for their participation before Brandon lifted the winners trophy.