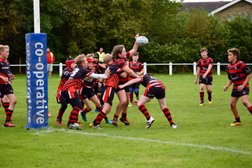 Returning to home soil for the first time in a few weeks Birstall put on an entertaining display of rugby.

Birstall managed to go over for four tries during the game with Harry A, Verne, Brandon and Cohan all going over for tries. Jack & Thomas were both able to add one conversion each.