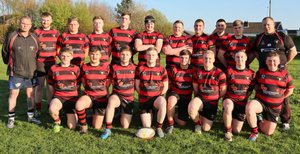 Birstall progress to next round of the HW Reporter Cup.

The gulf in class was evident early on as Birstall Victoria U14's recorded a club record 82-0 victory against Shawcross,

Zayne Cloete opened the scoring in the first minute with a powerful drive from 20 meters out. Opponents MOM Matty Ward was next to score after 90 metre break down field and he went on to register 4 in tota. . Coaches MOM Kane Bedford was instrumental in most of the Birstall attacks nd after clever play from both edford and Ward Players MOM Brandon Dyson went in for the first of his 2 tries. Birstalls next score came from hard working Stand Off Alex Hollingworth who showed the Shawcross defence a clean pair of heels to race in from 40 metres.

The try of the game came in the second half when Parents MOM James Colleran collected the ball from the restart beating 4 defenders then sprinting down the touch line to score in the corner. Farhaan Sarwar made an impressive debut for Birstall and along with lively hooker Zak Knowles, Ashaan Newell and Aaron Clough he took the Vic forward.

Jacob Fozard also recorded a brace of long range tries after solid work from Matty Goodwill and Brandon Trapps and out wide Connor Teale shone. Ben Ward was the next to cross after a mazey run to the post Hollingworth scored again late on and the final Birstall try came from elusive winger Alex Stockwell wide out.