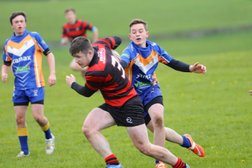 Hat-trick for Fozard in under 16's victory!

After a couple of week soul searching and some incredible training sessions following defeat at Bentley,

Birstall Vic's depleted U16's squad made the trip to Queensbury with only 14 fit players and battling a much bigger pack the odds were certainly stacked against them .

Going 12-0 down 10 minutes into the 2nd half and despite being butchered by the officials on the penalty count, the Vic players suddenly turned on the after burners in attack and it was Jacob Fozard who crossed for the first of his 3 tries after great work from Brandon Dyson , Matty Goodwill and Hooker Lee Riach .

Birstall were then put under pressure having to defend 24 tackles on their own line, but Aaron Clough was on hand to defuse 2 cross field kicks and Callum Roberts stole the ball to further relieve the Victoria defence .

Fozard was again influential after some powerful drives from Joe Snaith , Sam Howarth and Harry Henderson, a penalty was awarded and quick thinking from Fozard saw him scoot under the posts, unopposed with Roberts converting .

Fozard’s hat trick came from the scrum base in his own 20. Brendan Fearn , James Colleran and Bennett Jones had made good metres up field, but when the ball was turned over on the last tackle, Queensbury powered toward the Birstall line. A last ditch tackle from Thomas Clarke and Zachary Knowles forced a knock on giving Birstall head and feed at the scrum. From there Fozard weaved his magic , packing down at loose forward he picked the ball up from the base of the scrum and galloped to the sticks giving Roberts an easy conversion and Birstall a well earned 16-12 Victory.

It was a proud moment for the U16's coaching staff who have never lost faith in their lads and knew it was just a matter of time before they put in a 60 minute performance.