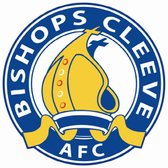 In their long history Bishops Cleeve have wandered about more than most clubs but at long last they have their very own new stadium. For many years they played on a ground in Stoke Road facilities were all rebuilt and re-opened in 1971 by Ted Croker, the then Secretary of the Football Association. However, in 1995 their landlords the Church Commissioners sold the land for housing and so Bishops Cleeve F.C. became homeless.

On the field of play Cleeve soon became regular champions. When they left their Cheltenham League roots for the first time they won four championships in their six seasons in the Gloucestershire Northern Senior League.
After dropping back to the Cheltenham League Cleeve gained promotion to the Hellenic League in 1983. They quickly established themselves as a force to be reckoned with, finishing fourth in their first two seasons in Division One. They followed this by finishing third and then finished as Champions.

The five seasons in the Hellenic League Premier Division were a struggle though they did win a trophy, the Premier Division cup during that time. Returning to Division One Cleeve then had a period of rebuilding both on and off the field. In order to preserve their Hellenic League status the club entered into several ground sharing agreements and the grounds of Moreton Town, Wollen Sports at Highworth, and Forest Green Rovers, were all called home at one time or another. During this difficult time the club was kept alive by the efforts of a few devoted members spearheaded by former Cheltenham Town legend Dave Lewis whose efforts were recognised by Carling Brewery who awarded him their national title of “Club Man of the Year”.

Approval for a new site at Kayte Lane was given in 1997, and members built a new clubhouse and changing rooms using materials donated by local employer Smiths Aerospace. Once this approval was given there was tremendous transformation in results on the field and they were duly promoted in 2001. In order to take up this promotion opportunity one final ground sharing agreement was arranged with Southern League club Evesham United.

For season 2002-03 the team made a triumphant return to their own ground after the new stand and floodlights were approved. The F.A. Charter for Football in the Community was awarded to the club in December 2002, thanks to the efforts of Club Chairman Dave Walker, in partnership with Cleeve Colts Youth Team and the local council.

2004 saw the completion of the magnificent new clubhouse and changing rooms which benefit the community as well as the club.
2006 saw the club gain promotion to the Southern League Division One Midland, something that looked like a pipe dream 10 years previously. In their first season the club finished a creditable 13th place and followed this up with 12th place in 2007-08. The second team that season gained promotion to the Gloucestershire County League. 2008-09 saw the first team moved to Division One South and West and they ended the season in a disappointing 18th place whilst the second team finished a creditable 4th Place in the County League. 2009-10 saw the first team finish strongly to secure 11th place, the club’s highest ever position. 2010-11 was not such a good season and the club finished 15th.