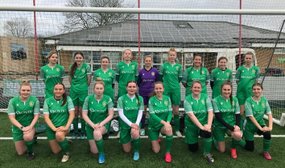 Cleeve edge out Dursley in a 5 goal thriller

Cleeve Ladies returned to playing after a 3 week break against a strong Dursley outfit sitting 2nd in the League.

Dursley started the brighter and dominated the game for the first 10 mins and we had Beth to thank in goal for keeping the game even. Dursley eventually got the the lead their domination deserved when following a period of possession and an excellent cross, the Dursley forward finished powerfully with a header into the bottom corner. 1-0Conceeding the first goal and with with Cleeve not finding their passing range...we needed to dig in and show some character and not conceed a second.

Seven minutes after conceeding Cleeve drew level when Jess Stirling fired home, in off the post, from the edge of the box when a corner was only half cleared. 1-1. On 19 mins Cleeve took the lead when Bella Newhall latched onto a long through ball got the better of the challenge by the onrushing keeper and passed the ball calmly into the empty net. 1-2. After taking the lead an blowing away the 3 week old cobwebs Cleeve got on top and created a number of good opening but were unable to add to their advantage.

The second half followed a similar pattern to the first with Cleeve, having the majority of the possession but without finding the final pass which could have opened up the Dursley defence. On 76 mins Ella Sharpe finished well from the edge of the box past the onrushing keeper to make the game safe 1-3!. That should have been that. In fact Cleeve spurned a glorious opportunity to score a 4th and put the game to bed with 10 minutes to go.... and this nearly came back to haunt us. Two minutes later Dursley were back in the game. A well struck shot from the edge of the Cleeve box found the bottom corner. 3-2. game on. Suddenly the pendulum had swung and it was Dursley who looked the more likely to score the next goal and snatch a draw. Fortunately Cleeve managed to hold on and win what in the end was a hard fought victory.

Player of the Match - Bella Newhall...not only for her goal but for the never ending running.

The win takes Cleeve within 3 points of the top...however with the league being as tight as it is we remain in 7th... 4 places above the foot of the table!

Next week we welcome Bitton Ladies to Kayte Lane, who up until their abandoned game with Glos City yesterday, were sitting top.