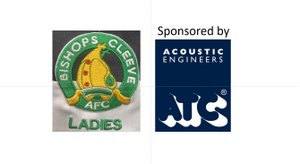 On yet another very warm and windy Sunday afternoon Cleeve welcomed last seasons Div 1 runners up Bristol and West.
With both teams missing players from last season both clubs are in transition. Could the current Cleeve crop step up?
With two defenders withdrawing through illness on Sunday morning (Meg and Izzy B) it gave the opportunity to two of the Ladies originally pencilled in on the bench to start. A great opportunity which both grasped with both hands (not literally!).

Cleeve started the brighter and created some half chances in the first few minutes. Although not testing the goalkeeper we were dominating the game. On 11 mins good work by Jess and Leonie sent a wheezing Izzy Owen through...she broke into the box, bided her time and eventually slotted the ball across the goalkeeper into the bottom left hand corner. 1-0. on 15 mins Lauren hit a shot from outside the box and it struck the upright! Cleeve were on top and back four were relatively untroubled...that is until on 17 mins when we failed to go and meet the ball and challenge as Bristol broke down their left. A couple of ricochets later and the ball was thumped into the back of our goal. 1-1 . Although Cleeve did gain the upper hand for the rest of the half we failed to capitalise on the chances. HT 1-1.

As the second half started the breeze picked up and we would be playing into the head wind for the rest of the game. Bristol began the second half better and they were the team who looked the more likely to break the deadlock. Saying that, apart from a couple of scares as we allowed the ball to travel across the six yard box from corners, Ellie remained fairly untroubled. With 20 mins to go Leonie was brought back off the bench and two mins later she latched onto a great through ball, took it on and finished well. 2-1. Five minutes later Cleeve then had two excellent opportunities in the same move to put the game to bed, but somehow we managed to hit the target from 4yrds out!.

Bristol gained confidence from this and took control of the game once again and looked the more likely to score. With only 5 mins to go after a lung busting run Emma Lewis asked to come off... just as she was leaving the pitch she collapsed and Ellie Sharpe was quickly on hand to do her First Aider bit. It transpires that a combination of alcohol the night before, no food, the heat and bang on the head all culminated in the Emma's collapse. I am pleased to report that Emma was fine after the game after taking on board some fluids.

The game restarted with very little incident to report and Cleeve took the points. Well done to the players who put in a shift. Apart from the one lapse the defense was very solid. Joint players of the match went to Jess Stritling and Jess Witcher.

Next it is top of the table Longwell Green ...life doesn't get any easier!..