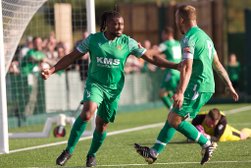 The late equaliser came from Shayne Anson, for his first goal of the season as he worked his way up front in order to claw back the deficit.

The other Cleeve goals came from Isaac Pearce and Jack Watts respectively. Pearce’s goal equalised in the first half meanwhile Watts’ came in the 90th minute to make it 3-2

The Mitres were awarded a penalty in the 85th minute, that was saved by Blues keeper Mike Searle and the rebound couldn’t be put on target. The foul on Newman which awarded to penalty results in a red card for Helston as well.

Anson’s thrilling equaliser came as a result of an overcrowded box and the man advantage as it was only Will Turner who was left outside the box for Bishops Cleeve. The ball found the defender, who had been influential upfront ever since he was put up there. Anson managed to strike it low into the goal and past Searle.

In what was a back and forth first half. Both teams could have easily could have had more than one goal. Especially Helston Atheltic who despite taking the lead early, missed two or three close range chances.

First chance of the half came for Helston, who had a penalty shot in the third minute. But the ref quickly dismissed it and play continued, about a minute later a Helston corner was initially saved by Lewis Clayton before the rebound was put away by Steve Colwell in just the fourth minute.

After they conceded the Bishops Cleeve team calmed down and started to exert more pressure onto the Blues although not being able to work their way into the net. At times it looked like every shot coming from a Cleeve player was straight at the keeper.

However not only did the Mitres chances increase but those coming from Helston evaporated. Despite that Sam Carter missed the target from 10 yards out for the Blues. In which they could have easily doubled their lead.

Something the visitors would come to rue as eventually the home team did find their equaliser through Isaac Pearce. The ball was played into the box and bounced around before Pearce got his shot off which crossed the line before bouncing back out. In which Jack Watt smashed it into the back of the net in a half celebration/half making sure the goal counted.

Second half started in the same as the first. As in the 50th minute Rubin Wilson who had been troubling Bishops Cleeve all game with is physicality around the box, finds space and shot it into the bottom left corner to restore the Cornwall’s side’s lead.

It was made 3-1 quickly as in the 57th minute, the Blues doubled their lead after Tom Payne managed to find the back of the net. The next opportunity did fall to the Mitres and Watts but a shove in the back within the box and no pen given quickly put an end to that.

Despite several chances throughout the rest of the half and Bishops Cleeve clearly being the better side. They don’t mind the find the back of the next. A sweet half volley from Pearce is deflected by the keeper over the bar, before a shot coming off the resulting corner is also deflected off target in around the 80th minute.

Credit to those substitutes made by manager Paul Collicutt as all three made were influential to the extra attacking threat the Mitres had, as Blaine Waugh, Kai Newman, and Jordan Annear all sustained a high level of production and attack throughout the closing minutes.

Bishops Cleeve continued to dominate the possession before after the 85th minute penalty. Which eventually resulted in another stunning half volley attempt from Pearce which was once again kept out by the keeper. Watts’ goal eventually came from a ball played into the box from the right side right to his feet, as he managed to take a good touch and slot it past Searle.

That was the Cleeve forward’s seventh goal of the season.

After the restart the Mitres still dominated and eventually though a corner. Which saw Clayton come up from his own net with three minutes still to play. Leaving just Will Turner on defence for Cleeve, although that didn’t result in a goal, Clayton continued to stay up for the next chance which one against saw another Pearce volley attempt as he went 3/3 for putting them on target.

All this pressure continued to build and eventually paid off when Anson scored the equaliser.

It was yellow cards for Jordan Copp and Anson in the first half, both for separate incidents in the 29th and 36th minutes respectively. George Box and Carter were both cautioned in the second half.