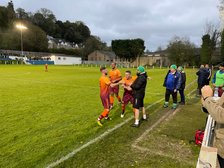 In what would prove to be an evenly contested match it was the visitors who would fire the first shot across the bow as new signing Joe Selman crossed the ball for Jack Watts who tried first time to guide the ball into the far post, however it rolled just wide.

Both sides exchanged attacks whilst creating very few chances and the hosts didn’t have their first shot until the 31st minute when ex-Mitre Harlie Price turned the defender but his first time shot was tame straight at Luke Merchant in the Cleeve goal.

Cleeve then saw Mitre of the Match Leroy Odiero have a header blocked and Watts’ shot saved before the first real talking point of the match occurred. Jordan Annear had been put clean through on goal and with the hosts’ ‘keeper Gavin Jones advancing he attempted to lob him. As he took the shot the Brimscombe ‘keeper clattered into him outside the area. With the Cleeve bench shouting for a red card, only a yellow was given with the fact Annear got his shot away probably saving Jones from an early bath.

Price again had a chance to give the hosts the lead as Jones’ long ball forward found the hosts’ top scorer perfectly but he blasted his shot past the far top corner.

With the scores level at half time both sides would have been looking to grab control of the match and it was the Mitres who started brightly again as Watts saw a shot well blocked before claims for a Cleeve pen were waved away.

Harrison Reeves then looked like he was going to score but Sam Folkes but in a great challenge to deny the ex-Brimscombe and Thrupp man.

The hosts then had the best chance of the match when a cross from the right found Jack Smith in acres of space by the penalty spot but he blasted his shot straight at Merchant.

With another penalty shout for the visitors waved away it felt like a goal was coming at one end or the other and it fell the way of the visitors. Countering from a Brimscombe and Thrupp attack, the ball found Annear who sent the ball out wide to Reeves. The agile attacker then managed to turn the defender inside out before placing his shot into the far corner to give the visitors the lead.

This goal saw the hosts finally fire up as they chased the game and it took a goal line clearance from Reeves to deny them an equaliser less than five minutes later.

The visitors had to withstand a barrage in the final twenty minutes with the only rest coming when they were able to clear the ball to the flanks and hold it up there, but an all round solid defensive display, combined with the odd wayward shot from the hosts, helped Cleeve hold onto the win at full time.