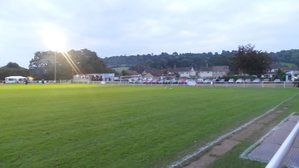 A stoppage time winner meant late heartache for Bishop Sutton as they lost at Longwell Green Sports this afternoon.

Following our top class performance last Saturday at Welton we hoped to continue this run of form against Longwell Green who had had an identical start to the season.

From the off it was apparent that the visitors were ‘up for it’, putting us under continuous pressure. We had two chances in the first half; on 16 minutes, Rawlings shot narrowly over with a powerful drive from the left and on 32 minutes Gingell showed good skill to beat the defence but shot straight at the keeper.

On 35 and 36 Manns produced two good stops with his legs.

The second half continued in a similar vein with Manns again called upon to produce good stops with his legs in the 61st and 70th minutes. The first two subs were made in the 56th and 76th minutes, Ellis and Rawlings giving way to Islyan and Carr.

On 85 minutes Box was narrowly wide of the right post with a powerful drive from 20 yards. We were awarded a penalty in the 89th minute when Gingell was pulled back in the area but the John penalty, although well struck and directed, was saved by the Longwell keeper who guessed correctly diving to his left.

Directly from the keepers clearance the ball was moved quickly upfield on the left, the centre finding an unmarked forward who calmly converted.

In the space of just a minute we went from a potential one nil win to a one nil loss. Our Man of the Match, keeper Chris Manns for another top class display.

Next up, away v Calne Town, Saturday the 24th August.