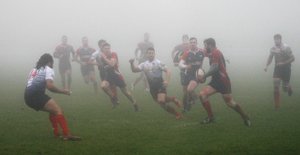 Honours even at Ramsgreave Drive

In a tight affair Burn took on Birkenhead Park and in the end the teams could not be separated as the game finished 20 points all.

In heavy fog the lead of this game toed and froed between the two teams, first Burn went ahead, then Birkenhead, then Burn again and finally Birkenhead hit back towards the close to end the game all square.

Burn started well as they kept the ball in hand and worked their way up into the Birkenhead 22 and on 5 minutes Burn were awarded a penalty which Leon Fifield kicked. After this much of the play was in the middle of the pitch until the 22nd minute when Burn scored their first try. Burn had a scrum just outside the Birkenhead 22, the ball was spread wide, however it went to ground, Burn re-gathered it before Craig Dootson barged his way through the defence, he then passed inside to Josh Reilly who ran on to score under the posts. Leon Fifield added the conversion. Birkenhead hit back through a penalty within a couple of minutes. Burn then nearly scored soon after, but were held up over the try line. Burn continued to have the best of the remainder of the half, but could not manage another try and had to settle for another Fifield penalty which made the score 13-3 to Burn at the break.

Birkenhead started the second half the better with much of the play in the Burn half and the visitors were rewarded with their first try and conversion following a catch and drive from a line out. Almost straight away Burn worked their way up into Birkenhead’s half and were awarded a penalty, however Fifield was unable to kick it on this occasion. Then on 64 minutes Birkenhead scored their second try, they had a 5 metre scrum, they got a drive on before the number 8 just manage to pick and stretched for the line. The conversion was added and the visitors now had a 4 point lead. However, on 72 minutes Burn regained the lead, they were camped in their opponents 22 and were awarded a penalty 5 metres from the line, Danny Maher took a quick tap, but was stopped just short, Burn managed to recycle the ball and went through a couple more phases before Ed Sinclair managed to break a tackle and stretch to score. Leon Fifield kicked the extra 2 points which made the score 20 points to 17 to Burn. With just 3 minutes left Burn were penalised on their own 10 metre line and the Birkenhead fly half just had enough weight on his kick at goal to even up the scores and the game finished 20 all.

This was a very good start to 2017 for Burn, Birkenhead sit second in the league and are still challenging for the top spot, so to draw with them not only shows how far Burn have come since last season when they were suffering significant defeats to the top teams, but it also indicates how far they have come within this current season, as when Burn travelled to Birkenhead earlier in the year they were heavily defeated and now Burn came so close to winning this game and in the end were disappointed not to. Burn face another tough game next week as they travel to Wilmslow.