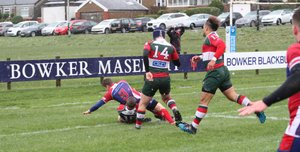 Burn make it six in the snow!

On a bitterly cold day with regular snow and hail showers, we were never going to see festival rugby, at times both teams tried, but a slippery ball and frozen hands resulted in many attempts breaking down. In the end it was the boot of Leon Fifield that proved the difference as he kicked 14 points.

Waterloo put Burn under pressure at the start of the game, their fullbacks jinking run saw him get to the try line, but Burn managed to hold him up, however in doing so were penalised which saw Sean Hall sinned binned on 5 minutes. Waterloo took immediate advantage as from the 5 metre scrum they went blind, the ball was passed to the fullback again and he went low to score. The conversion was missed, but the visitors had an early 5 point lead. This lead didn’t last too long as within a couple of minutes Leon Fifield landed a penalty kick from 40 metres out. On 15 minutes Burn had the lead, from a lineout on the 22 they secured the ball before it was feed to the charging Corey Logan, the ball was recycled, Ockert Eramus made a break taking him to 10 metres out, he then found Josh Reilly who crashed through and just managed to make it to the try line and touch down. Leon Fifield added the conversion. Not long after Waterloo missed a very kickable penalty. They did try to keep the pressure on Burn, but the Burn defence kept them out. Leon Fifield had another penalty kick from over 40 metres out, however this time it was closer to the touch line, while he had the distance it went to the right of the post. Although he didn’t have to wait long for another chance, which he readily took as the ball sailed over from 35 metres out to give Burn a 13-5 lead. Fifield was getting plenty of kicking practice as within a couple of minutes he had another chance from over 40 metres out and he didn’t disappoint as again his attempt was successful. Before the break Burn were pushing their opponents, but were unable to secure any more points, leaving the half time score at 16-5.

At the start of the second half Burn had most of the ball, but didn’t come close to scoring a try, they did have a further penalty chance on 48 minutes, but this time it was pulled to the left of the post. After this there was little to report until the 65th minute when Waterloo scored their second try, prior to this most of the play had been in the middle of the pitch, but from a penalty the visitors kicked well to the corner, from the line out they caught and drove over the Burn line. The conversion was successful and the score was now 16-12. Fifield had another penalty chance to give Burn a little more breathing space, but the kicked was pulled wide. After this Waterloo didn’t really threaten Burn again, however Burn were not able to score any more points either, until the last kick of the game as Leon Fifield kicked another 3 to make the final score 19-12.

Burn will feel they deserved their win, they seemed quite comfortable until Waterloo’s second try, however they prevented their opponents from scoring any further points to run out winners. Next week Burn will look to keep their winning streak going, but it will be tough as they travel away to Wilmslow.