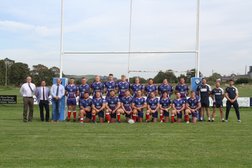 This was Burn’s first home loss since September. Wilmslow scored two tries in each half, while Burn were unable able to keep pace and could only respond with one try of their own.

Wilmslow had the better of the opening play and were rewarded with a try on 14 minutes following some good interplay which saw the number 9 score. Burn hit back on 25 minutes, from a lineout 5 metres out their initial drive was halted, Burn had several more drives through the forwards, the ball then found its way to Lawrence Nelson, his well timed pass put Tom Lavelle in just enough space to cross the try line to score. The conversion was missed leaving the scores 5 all. This proved Burn’s only highlight of the game as Wilmslow steadily took control of the game with their ability to keep control of the ball which restricted Burn’s possession. Wilmslow capitalised on their control of the game with a try and conversion on the half hour mark which gave them a 5-12 half time lead.

Burn would have started the second half with hopes of a comeback, however this never materialised, firstly Sean Hall was sin binned in the early stages of the half, then on 55 minutes Wilmslow extended their lead. From a 5 metre scrum the Cheshire side picked and went for the line, Burn stopped the initial attack, but Wilmslow recycled and scored too easily for the home sides liking. The conversion was added and Wilmslow had a 5-19 lead. For much of the rest of the game Wilmslow were in control, with Burn rarely out of their own half. To Burn’s credit they prevented any further tries until the last couple of minutes when the away side scored their fourth, followed by the conversion to give them a 5-26 victory.

Wilmslow deserved their win as they controlled the ball more effectively. Burn failed to spark and will be disappointed to have been unable to put a stop to their recent bad run. Burn now have one game left this season in two weeks against Stockport. Despite recent struggles Burn have come along way this season and they will hope to finish on a high.