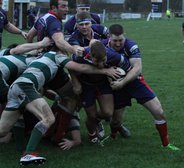 Burn too strong for Penrith

Burn continued their return to form with an impressive 32-12 victory over Penrith at Ramsgreave Drive.

After a strong start by Burn, Penrith clawed their way back into the game, however a powerful second half from Burn ultimately saw them run out comfortable winners.

With a strong wind behind them Burn got off to a whirlwind start, as after just 4 minutes Burn kicked to the corner from a penalty, caught and drove, with Wilf Whittle in control of the ball as Burn crashed over. Just 3 minutes later Burn had their second try, Penrith had tried to run out of their 22, the ball was spilt 20 metres out, Ross Liddle was the quickest to react and hacked the ball on, he then showed good pace to touch the ball down before it going dead. Alex Taylorson added the conversion. After this Penrith came back at Burn, while getting close to the try line Burn were able to clear the danger and actually extended their lead to 15 points with a penalty from Alex Taylorson as he slotted his kick from 40 metres out. On 26 minutes Penrith hit back with a good try, from 30 metres out the fly half delayed his pass and this helped the centre crash through into the 22, a pass outside and then back inside saw them score by the posts. The conversion was kicked. Aided by regular penalties Penrith maintained pressure on Burn, and on 37 minutes a quick tap penalty saw them crash over the line. The conversion was missed. Just before the try there was a bit of a dust up that saw Sam Gale and a Penrith player getting sent to the bin. The half ended with Burn having a narrow 15-12 lead.

With the wind behind them Penrith nearly had a flying start to the second half, but the ball was knocked on just metres from the try line. That was as good as it got for Penrith and Burn took control of the game, a Penrith player was sent to the bin on 46 minutes and it was now Burn’s turn to get their share of penalties and soon took advantage as on 52 minutes Burn drove Penrith off their own ball in a scrum, the ball was recycled and fed to Corey Logan who then set off on a typical barnstorming run as he brushed aside 3 defenders to score. The conversion was missed. Burn secured their bonus point on 58 minutes, another catch and drive saw them crash over the try line, this time it was Tom Burtonwood in control of the ball. Alex Taylorson was unable to add the extra points. A fifth Burn try followed on 64 minutes, Josh Reilly took a quick tap on the 10 metre line, he was illegally pulled back, but he managed to off load to Corey Logan who took play up to the 22 before passing back inside to Sam Gale who ran on to score by the posts. Alex Taylorson added the conversion to make the score 32-12. The rest of the game was played out without any further points, but it was Burn who remained the more threatening, however the only event worth noting was a yellow card to Jamie Brookes as the game ended 32-12.

Penrith were above Burn before this game, but the 5 point bonus point win saw Burn leapfrog their Cumbrian opponents and Burn now find themselves sat in fifth. Burn’s second half performance was possibly the best of their season, with Burn playing into the wind there was a chance Penrith would blow them away, but Burn were composed in possession, retained the ball and out powered Penrith which saw the home side score 17 unanswered points in the half. Burn will hope to keep their form going next week as they travel way to Broughton Park in the last game of 2018!