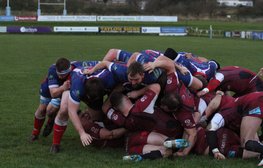 Burn end year with a win

Burn brought 2019 to a close with a narrow win, as they beat local rivals, Rossendale, 7-3.

With a strong wind throughout the game and the occasional rain and hail storms, this game was never going to be a festival of rugby, instead grit was needed and what followed was a tight, tense game, with defence from both teams coming out on top.

Burn had the wind behind them in the first half and they started the better of the two teams, with much of the earlier pressure in the Rossendale half, with Burn looking the most dangerous. They had the visitors defending their line and they defended well keeping Burn out. However, when Burn were awarded a penalty on 11 minutes, they elected to scrum 5 metres out, Burn got a good shove on, Rossendale were penalised and Burn set again for a scrum. Another good shove from Burn followed and with Rossendale back pedalling the referee awarded a penalty try as Rossendale infringed as Burn neared the try line. This gave Burn a 7-nil lead. After this Burn remained on top in regards to possession and territory, however were unable to create any real clear chances and the half ended with no further score and without much incident.

From the start of the second half Rossendale took advantage of the wind, as they kicked a penalty from 45 metres out, narrowing the score to 7-3. What followed was a bit of an arm wrestle of a game, with neither side able to exert any sustained pressure. On 55 minutes a Rossendale man was yellow carded for a high tackle, however during the sin bin period Burn were not able to take advantage. The next chance of points fell to Rossendale on 67 minutes, however this time another long-distance penalty kick drifted wide. In what we thought was the 73rd minute Frank Skofic was shown a yellow card, this gave Rossendale a real boost and they kicked to the corner from the penalty, a catch and drive followed, however Burn were able to keep their opponents at bay. Burn managed to work their way up the pitch and appeared in control, however as the match seemed to go on and on, Rossendale had their chance to work their way back up into the Burn 22 and pressure the try line again, however again Burn held their nerve and the deference remained strong enough until the final whistle was eventually blown to Burns relief and the game ended 7-3.

On the whole, based on territory, Burn just deserved the win in this hard-fought game. This win sees Burn in eighth place in the league on 32 points at the half way point of the season, when considering this is Burns first season playing at this level, they should be proud of themselves. Recent history shows that it is hard to stay in the league after promotion, however Burn already have more points than two of the teams who went down last year, while the third team went down with 35 points, so Burn are not far from this. However, this is a very tough league and Burn cannot take anything for granted, they should enjoy their Christmas break and then get back to the hard work for 2020, which starts with a stern test as they travel up to Blaydon. Dino Radice, Director of Rugby, added, “The players and coaches would like to thank all the supporters, we have always received great support, however the level has stepped up to another level this season. We would like to wish all a Happy Christmas and see you in 2020.”