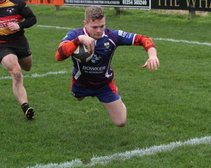 Burn make it 3 wins in a row

This was a competitive game throughout, however 3 first half tries from Burn set up this win and a solid second half performance, into the wind, sealed it.

Burn had a strong wind behind them in the first half, however it was Kirkby who got points on the board first. A high tackle on 3 minutes gave Kirkby a penalty on the 22 and saw Myles Harrop sent to the bin, Kirkby kicked the penalty to take an early lead. 5 minutes later Leon Fifield pulled the scores level with a penalty for Burn. Playing numbers were also soon level as a Kirkby player was shown a yellow card. Burn scored the first try of the game on 11 minutes, they kicked to the corner from a penalty, from the line out they didn’t make too much ground, however Sammy Russell looped round to the blindside and took the ball, this caught Kirkby short, Russell then drew a man before passing to Josh Reilly, Reilly then did well to evade a covering defender to dive slow to squeeze in the corner. The conversion was missed. On 15 minutes Burn scored again and it was Josh Reilly in for his second of the day. Scott Richardson made an initial break before passing to Reilly who had a clear run in. Leon Fifield added the conversion and Burn had a 15-3 lead. Fifield added another 3 points on 18 minutes. After this Kirkby managed to stem the flow and spent some time in the Burn half, but didn’t really threaten points. Then on 32 minutes Burn showed them how to do it as they scored their third try, they appeared to have lost the ball when Kirkby won a scrum against the head, however Sammy Russell read play well and intercepted a pass, he was pulled down, but the ball was retained through a few phases, before Russell was involved again, he made a half break, Corey Logan then made the decisive break which took Burn to within 15 metres of the line, Logan then passed outside to Greg Nicholls who ran in to score. The conversion was kicked by Leon Fifield and Burn were 25-3 up and this is how the score remained at the break.

With the wind now behind, Kirkby would have hoped they could come back at Burn, however on 50 minutes Burn struck a hammer blow as they scored their fourth try to secure a bonus point. From a line out just outside the Kirkby 22 the ball was over thrown, however Tom Lavelle took it, he brushed off one man and then ran further than many had ever seen, as he closed in on the try line, he held off the final defender to score. Fifield was unable to add the extra points. On 68 minutes Kirkby gave themselves a bit of a life line as they scored a try and conversion, they had kicked to the corner from a penalty, they then maintained the ball as they worked their way across the pitch with a gap finally appearing in the Burn defence for Kirkby to go over. Kirkby continued to try and push for more points, but Burn managed to keep them a safe distance from the try line and the game finished 30-10.

Burn thoroughly deserved the win, but the margin of victory probably didn’t reflect the closeness of this game. However, ultimately while Kirkby battled throughout, Burn just had the extra power and cutting edge that carried them to the win. The win cements Burn in mid table. Next time out they couldn’t face a much tougher game as they travel away to promotion chasing Harrogate.