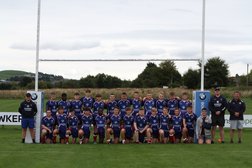 The second round of the Lancashire Club and Blackburn once again were pitched against stern opposition entertaining LSH who play in League A of the Halbro League compared to Burn in League D. Another great opportunity for the team to test themselves.

Similar to our last league fixture, this was a game of two halves. Blackburn dominated the first half scoring 3 tries in quick succession whilst squandering a chance to score a couple more, which in the end proved very costly.

Our first try was scored brilliantly by Tom Foster. After a great break over the game line Tom cleverly chipped the ball over their fullback and expertly gathered the ball to score. He converted the try himself.

Two further tries came for Burn, virtually carbon copy and both scored by Lewis Delamere in the left hand corner. Great retention play by the Blackburn forwards which led to quick ball to the left-hand side and Lewis popping up to drive over the line. Sadly neither try was converted.

In the last play of the half Burn was caught outnumbered on the blind side and LSH capitalised to score under the posts. Their first lapse in concentration during the whole half. At halftime Burn led 17-7.

This was a bruising encounter with some hard hits and great contests between the packs. But we knew LSH aren't in League A for nothing and this proved to be the case.

Although the second half continued to be a brilliant contest, LSH slowly took over and scored 17 unanswered points. Burn really made them work hard for this victory and the neutral would never have placed these teams so far part in the league systems. A big testament to our squad who once again stood up firm and nearly caused an upset. Well played guys - you should be very pleased with your performance.

I'm please to report that Tony Furbush who was injured during the game was checked out in hospital and released with only bad bruising - he's resting up for a few weeks.