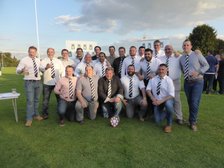 On Saturday 19th September the Black Horse took part in the inaugural Smallest Rugby Club World Cup. With "small" sides from all of the UK and even a side from Malta it promised to be a great day of rugby.

Following an unplanned sightseeing tour through London the Horse arrived to find themselves in a group with Old Oundelian RFC from Surrey and the Cottenham Renegades from Cambridge. Twenty minutes games were planned to determine who would make it through to the cup, plate and cuddly toy semi finals.

Pool Game 1
Black Horse 19 v 0 Old Oundelian RFC
The Horse started off against the side from Surrey, who had only managed to bring 10 players and were loaned Neil McDonald, Phil McKellar and Matt Rogers. With only twenty minutes to play, the horse struggled to work out a game plan and started frantically. The ball was forced out wide quickly and errors were rife. Eventually the ball out wide worked for the Horse and Tony Bolger scored the first try of the competition. This relaxed the horse and a second try came soon after, courtesy of Russell Dee. Old Oundelian tired and the horse should really have scored more in the second half. In the end they only scored one more try, a great run from Isaac Aitken.

Pool Game 2
Black Horse 0 v 12 Cottenham Renegades
The side from Cambridge were next for the Black Horse and top spot of the group was up for grabs. Perhaps the 30 minute break between games relaxed the horse too much as they never really got going and Cottenham eased to a 12-0 win. This put the Horse second in the group and through to the plate semi finals.

Plate Semi Final
Black Horse 33 v 5 Hardwicke & Quedgeley Harlequins
The semi final saw the Black Horse face a side from Gloucester. A number of their players had been filling in for other sides and this showed as the Black Horse ramped up the intensity. New boy Mark Livesey made his first start and impressed, with his first and second touches of the match producing tries. He was, however, unlucky with his third touch but secured a hat trick later on. Either side of this third try came a classic 5m try from Adrian Lee and a classic side step try from Kingsley Hovell. In truth the black horse should have come away with a perfect score but for an intercepted pass which was easily scored by the quins player. A great win for the horse to see them through to the final

Plate Final
Black Horse 12 v 0 St Leonard Cinque Ports
A side from Hastings stood in the way of the Black Horse winning their first piece of silverware since 2012. The game was a tense affair but the horse had clearly saved their best performance of the day. The forwards were strong and battered their opposite numbers whilst the backs were running strong, with Mark Livesey and Isaac Aitken in the centres. A 5m penalty saw the first try of the game and unsurprisingly it was Adrian Lee who scored it. This settled the nerve as the horse ended the first half 5-0. The horse continued the intensity in the second half and scored quickly, Mark Livesey scoring his fourth try of the day. St Ports tried to come back but the horse defended well and the score ended 12-0. Black Horse RFC had won the plate

A great day for the Black Horse all round. Some great performances, strong team spirit, a dodgy coach driver, pictures with La Toya Mason and Sir Clive Woodward and some silverware to take back to the pub.

Thanks for all that attended and for the organisers for running a great competition, recognising the "small" clubs that play such a vital role in grass roots rugby. The horse will definitely be back to defend their title!