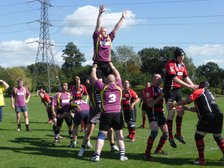 With no league fixture the Horse traveled to East London for a friendly against Dagenham 2nds. This was an opportunity for the Horse to try out a few new things and increase match fitness.

The Horse started strongly and it didn't take long for the first score of the game, Dan Astarita touching down on the right hand side. This was quickly followed by a second try from Mark Livesey after some strong running. The horse looked like they were going to run away with it when Tony Bolger scored the third try of the game but an intercepted pass for Dagenham put them on the scoreboard. This rallied the troops and Dagenham pressed the Horse but they stood strong and eventually scored again through Mark Livesey. Following four tries last week Mark was after more but decided to drop his next opportunity after he had passed the line. There was still time in the half for Dagenham to score again, through another loose Black Horse pass and the half time score was much closer than it perhaps should have been.

The Horse made a number of changes for the second half and continued the scoring soon after. Debutant Rob Scrimshaw, playing at scrum half, took all of five minutes to score his first try for the club and this was quickly followed by a try for Dave Lowe. The Horse kept going and the flankers decided to get on the scoreboard, with both Russell Dee and Michael Breeze scoring in the second half. With a 38 point lead the Black Horse slowed down and Dagenham pushed on, scoring 3 tries in a crazy last ten minutes to make the scoreline much more respectable.

A good win for the Black Horse and another friendly next week gives them time to keep trying new things before the next league game.

MOM - Isaac Aitken, ran the show and ran every corner of Dagenham!
WOM - Mark Livesey, for dropping a hat trick and subbing himself at half time..... jug avoidance