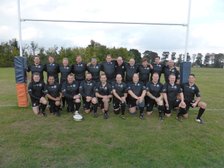 Strong start to the season for the Horse #BHRFC40

Great start to the season. 21 players available, a big win and some rust removed. Brilliant debuts from Thommo, Andy Grewcock, GBH Dan as well as long awaited comebacks from Mark Oakes, Scott and Kingsley! Ben matched his try total of 4 from last year in one match today and Chris Arberry entered his 47th season! He has promised he will play until he's 60, so that's a new 4 yr contract signed by the old legend! Well played everyone today!

MOM - Dave Lowe. Following on from immense training sessions through the summer, Dave was solid in defence and dynamic in attack even throwing some hand-offs in to his game!! #ClipboardBumBagIsBack!

WOM - Michael FigDonald. It was a toss up between Thommo and Fig....Thommo for believing it's a number 4s position to kick (regardless of how good the kick was!!) but Fig wins for being absolutely gifted a try scoring opportunity, 5m out at the end of a two man overlap. Instead of tripping, falling over and scoring, he cut back in field and ran into the last two defenders that we had just worked hard to clear out of the game! He was held up and that was that!

Drinks to be done next week: