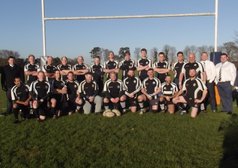 The Horse tamed by Ignations in opener.

In the early parts of the game, The Horse started tentatively, trying to put into action things learnt in training as well as integrate new members into the side. Enfield Ignations however turned up to Hoe Lane ready for action and started the game at pace.

Following an unclaimed kick off, Enfield seemed to jump on the hesitant nature shown by The Horse and immediately piled the pressure on. Although The Horse rallied, Enfield managed to claim early points. The Horse players knew that they would be in for a tough afternoon if they didn't respond and after some good work by scrum half Richard Hope, a penalty was earned 10m out from Enfield's line. Some quick thinking by Hope released skipper Adrian Lee with a quick tap and precision pass and with Lee timing his run to perfection and hitting full pace before taking contact, there was little chance of any Enfield defender stopping the inevitable try!

Although the conversion was missed, The Horse seemed to be showing they were up for the fight and although Enfield continued to fashion chances and collect points, The Horse were not giving up. This was shown especially by a break from The Horse back line, that had been reshuffled due to Ben Brown going off injured, some superb hold up play from Danny Mig and then individual brilliance by second row Tom Grover to somehow evade every available Enfield player to trot in under the posts from outside the 22m.

The second half saw the introduction of Paul Bailey at prop and this seemed to rejuvenate the pack, with The Horse starting to dominate the set piece, however Enfield continued to dominate the back line and the score reflected as much. Enfield were proving too strongand with The Horse getting tired, the Enfield winger (who was exceptionally quicker than most at this level) took his chances to collect four tried for himself. The Horse were now feeding off scraps for much of the time, but still managed to pick up two more tries. The first through an excellent break from Hope, who showed his class by winning the ball from the back of an Enfield scrum and sprinting to the corner. The final Horse try came through the tireless efforts of winger Dan Averagerita. Having been given licence by the skipper to run hard at Enfield's defence, Averagerita took his chance well and powered over for a score that will hopefully give him confidence throughout the long season to come.

This was a hard lesson for The Horse, but on reflection, a good lesson to have had so early in the season. The players are under no illusions now as to what is required and with some key players returning in coming weeks, The Horse will hope to up their game and perform to the high standards they set for themselves.

Next Saturday sees The Black Horse head off to The Smallest Club World Cup in Tolworth, where they will take on 11 other sides to test themselves against teams who only have one side, no ground, no clubhouse, affiliated to an RFU league and play more than 10 league fixtures a season.

Man of the Match: Scott Francis - for a polished performance at prop and hooker, stepping into some big shoes and showing promise at the lineout with some good throwing.

Wanker of the Match: Kingsley Hovell - for failing to attend the game and not letting anyone know.....deemed harsh, but fair! Obviously as Kingsley wasn't around, another candidate was chosen. So for the crime of running with the ball in front of him and presenting it kindly for an opposition player to take, like candy off a baby......the main thing we practised at training NOT to do.....step forward Michael Fignon!