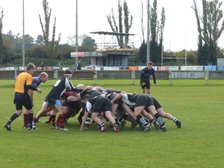 Black Horse come up short against strong Chesham side

Last years league winners traveled to Hertford today and with one victory each last season it was always going to be a tight game. The horse started the first half well and spent the first 5 minutes camped in the Chesham half. They got the first try of the game not long after, Rob Scrimshaw took a quick penalty and then preceded to run around 5 players to score himself. Richard Hope converted to put the horse 7-0 up. The horse continued the pressure straight from the kick off and Richard Hope was unlucky not to get on the scoreboard after a long run, unfortunately though injuring himself in the process.
It took Chesham 15 minutes to get in to the Black Horse half but the Black Horse defended well. Chesham knew that if they got the ball out wide they could cause the Horse problems and the first time they did they should have had a try, the ball passed forward to the winger. They did however get their first try of the day soon after. After camping themselves in the Horse 22 and numerous penalties, their prop took a quick one to make the score 7-5. The Horse rallied and came straight back at Chesh