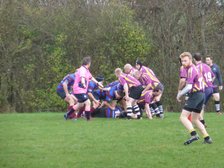 Great win for the Horse to finish 2015 on a high

The Black Horse traveled to Chesham for the final game of 2015, looking to end a great year on a high. With a strong team sent out for the Horse they were confident but having already been beaten by Chesham this season it was always going to be a tight game. And indeed the first half was very tight, with both teams strong in defense and struggling to make any ground on the other. However, Chesham were the team making more mistakes and gifting penalties to the Horse. Isaac Aitken scored 3 in the first half to take the Horse in to half time 9-0 up.

The second half was much more open and the Horse capitalised early. A good kick in to the corner saw the Chesham defense put under huge pressure and after some good work from Daniel Astarita, Isaac Aitken scored the first try of the game. The Horse continued to defend well and were making inroads in to the Chesham defense. It was Aaron Paea who got the second try of the game, in what was an all round destructive performance from the Kiwi Number 8.

This second try from the Horse gave Chesham some momentum and they immediately came back and scored from a great backs move, to leave the scoreline 21-7. Chesham threatened to come back at the Horse but quickly the momentum shifted and the horse finished off the game with a third try. A MOM performance from Tom Grover saw him score the final try, following some good work by the scrum. A great 26-7 win against last years League winners to finish 2015 on a high.

MOM - Tom Grover, a fantastic all round performance and a try to top it off
WOM - Tom Gatens, for forward passing, knock ons and not stopping Chesham from scoring