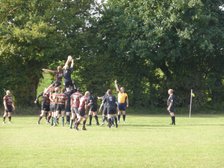 Physical game ends with Fullerians as the winners

In the Merit Table 4 game of the day it was 1st vs. 2nd, undefeated vs. undefeated, Black Horse vs. Fullerians 3rd. Naturally the game was incredibly close but Fullerians started the better. They spent almost the whole of the first 20 minutes camped in the Black Horse half but some resolute defending and good clearing of lines kept the score at 0-0. The Black Horse eventually ventured in to the Fullerians half and they made it count, getting the first score of the day. Some good hands found Mark Livesey who powered his way over to give the Horse a 5-0 lead. The Horse could have extended their lead 10 minutes later as Isaac Aitken came incredibly close from a penalty but at half time the Horse lead 5-0.

The second half was equally as even but Fullerians had much more possession. Eventually they made this count when they scored their first try of the game, converting it to give them a narrow 7-5 lead. The Horse tried to press forward but Fullerians defended well and made the most of their possession, scoring a second try of the game with 10 minutes to go. The Horse upped the intensity but it was too little, too late as the game ended 14-5 to the visitors.

An incredibly physical game for the Horse who can be incredibly proud of their performance and can count themselves unlucky to lose their undefeated streak. They'll be looking for revenge in the reverse fixture.