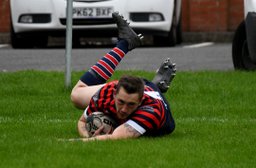 Denied At the Death!

Blackpool ended their run of defeats as they secured a hard fought draw away to Stockport outfit Heaton Moor in a fantastic end to end contest. The visitors reshuffled their side from the squad that had lost to out to Chorley the previous week with a number of personnel and positional changes.

The away side started the game strongly as the forward pack, led superbly by Chris Parlour, Greg Jones and Hugh Sweeney were dominant at the breakdown and the set piece, allowing the backline plenty of excellent quick ball to attack with. One such foray led to the opening points of the contest as slick handling between Harry Gregory and Antony Clark sent Chris Finch on a jinking run through the Heaton defence, which resulted in the home side conceding a penalty which Finch duly slotted over for a 3 – 0 lead.

As was to become the pattern the game quickly flowed down to the other end of the park as the hosts enjoyed a period of pressure with excellent defence from Dave Collett, Russell Woodward and Sean Craven, keeping them at bay before an infringement allowed Heaton to level up the scores as they added a penalty of their own. Blackpool almost fashioned an immediate response only for the final pass to just fail to find it's intended target and the hosts made the most of this reprieve as they broke from deep to cross for a converted try for a 10 – 3 advantage.

The Seasiders stormed back as powerful carries from Wayne Daws and Luke Crosbie deep into the heart of the Heaton defence provided the platform for Brady Barcock to rampage over from close range with Finch adding the extras to once again level things up on the scoreboard. After coming close on a couple of occasions, Blackpool hit the front in style as Adam Glover and Gregory combined to sent Clark racing through a gap with the fullback drawing in the defence before producing a miracle offload to the supporting Andy Davies, who delivered the coup de grace as he powered away from the chasing tacklers to score in the corner leaving his side 15 – 10 in front at the interval.

Blackpool started the second half as they had ended their first as slick offloads and strong carries down the blind side from Clark, Collett, Sweeney and Crosbie pushed their side forward and resulted in an infringement from the hosts. From the resultant penalty Finch had the presence of mind to quickly kick the ball forward a few yards whilst the Heaton defence was napping with the centre quickest to react as he collected the loose ball and crashed over for a cheeky, audacious try.

The visitors continued hold the upper hand as the half wore on as terrier like defence typified by the efforts of Parlour, Jones, Davis and Daws kept the hosts at bay whilst at the other end of the field Blackpool were threatening to add to their lead every time they had the ball. It came as no shock then when they went further ahead as Barcock broke from the base of the scrum on the half way line and marauded through the attempted tacklers before slipping out a great offload to the supporting Glover who raced 40m to dive over the whitewash for a 25 – 10 scoreline.

As the game reached its final quarter the pendulum swung back in favour of the hosts who pulled a try back as a Blackpool lost ball close to their own line presented Heaton with a invitation that they did not turn down as they crashed over for a short range try. Minutes later the home side were in again as they broke from deep within their own half and managed to keep the ball alive to go from one flank to the other to cross and cut the deficit between the teams to a solitary try.

With the clock counting down Blackpool looked to steady the ship as strong carries from Joe Dodd, Woodward, Wilkinson and Craven made the hard yards to carry the visitors into the hosts half, but a quick turnover ball saw Heaton launch a desperate counter attack as they broke-away downfield and just managed to avoid the despairing last ditch defence from Blackpool to squeeze in at the corner at the death to leave the game to end in a 25 all stalemate.

Although naturally disappointed not to have come away from Stockport with all the points, Blackpool could be very proud of a much improved performance that showcased the hard work that has been put in recently at training, with plenty of positives to build on going forward. Credit must also be given to Heaton Moor, who played their part in a fantastic game. Blackpool will be looking to claim their first win of the season this weekend when they play host to Crosby St Mary's.