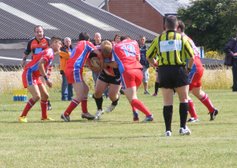 .Eagles Dare, But Lions Roar In The End

Blackpool Sea Eagles put in a battling performance as they went down 48 – 16 to a well drilled Liverpool Lions outfit. Blackpool, playing their first and only game this season, handed débuts to four new players in a squad that was hit by a number of late withdrawals.

The game began poorly for the hosts as two early tries for the Lions handed them a lead they would never surrender. After this initial setback, Blackpool steadied themselves and came back strongly with good scrambling defence from Adam Lancaster, Tom Cross and Russ Woodward amongst others keeping the hosts at bay whilst at the other end strong running from Jermayne Deen, Mick Harrison and Mike McDaid carried the fight to the Lions. Powerful carries from the home pack almost resulted in a try as Antony Clark broke through only to be denied as the final pass was intercepted, with Liverpool making the most of their reprieve as they crossed for two further scores in a three minute spell to establish a 20 – 0 advantage. Despite this Blackpool continued to fight, with tenacious defence from Chris Jackson, Tom Sanderson, Chance Bonham and Aaron Hargreaves denying the away side on more than one occasion before a try just before half time handed the Lions a 24 – 0 lead at the break.

A clearly fired up Blackpool began the second stanza well as excellent carries from Stuart Joyce and Nick Marsden provided the impetus for Luke Crosbie to power his way over under the posts with Harrison adding the conversion to narrow the margin. The Lions hit back with a close range try of their own, before more good work from Deen, Cross and McDaid carried Blackpool within touching distance of the Liverpool line allowing second row Chris Riedel to bulldoze his way over the whitewash for a 10 – 30 scoreline.

As the game entered the final quarter, more strong work from Joyce, Riedel and Marsden saw Clark held up over the line before Crosbie launched a towering kick which Sanderson collected to touch down. Crosbie guided over the conversion to leave the game poised at 16 – 30 with 18 minutes left on the clock. Regrettably this was as close as Blackpool would get as Liverpool's superior match fitness came into play in the closing stages as three tries in a seven minute spell sealed the win for the visitors and final score of 16 – 48.

In spite of the defeat Blackpool could be proud of the effort and commitment shown by every player against a good Liverpool Lions side. A number of players stood out for the home side, but in the end the man of the match fittingly went to hard running hooker Luke Crosbie, who capped a fine display with a well taken try and goal.