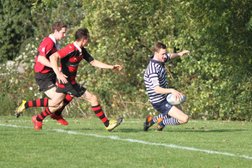 Boar Book Their Place In The First Round Of The Shield

Blue Boar came through a physical encounter in their Shield prelim with the backs claiming 3 of the 5 tries in conditions well suited to their craft. With the visitor leading at the break Chipping Norton were still in the game but with 20 minutes to go Boar took it beyond reach. The Home side fielded slightly younger team though the inclusion of Billy Douglas-Hamilton did bring the Boar average down to 47 !

A brace for George Sandbach either side of the break utilizing the mother of all side steps, one from Shield try specialist Seb Perry, another from flanker George Earp (don’t mention his Doris) and a penalty try instigated by the skipper completed the afternoons activity. Blanchard and his Chippy counterpart received sore ears from referee King for his repeated intervention between the packs ……neither giving any quarter.

Uncharacteristically the home team received the first yellow followed by an unfortunate ballet style lift in the tackle by Orpy for the second. With minutes to go our very own enforcer Tom Fillery ( busy all afternoon) walked with a fellow of similar standing from the home side. I do believe they had kissed and made up before reaching the side line. Four Blanchard conversions completed a good day at the office.

Thanks to
Chippy for their hospitality

No thanks to
Nothing really

Great end to end try from the home team at the death
George Sandbach’s John McEnroe moment and 10 metre march back
Nigel Murrin Volunteering to run the line in future games
IMO sir did well (couldn’t hear a word he said though)
Young Martin Realey, great in the warm up and tee specialist extraordinaire!
Chip Fillery's second chip through in as many seasons