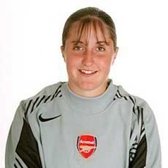 With pre-season training imminent, BLUFC is delighted to announce that goalkeeper Lauren Wells will be attending the first session on Wednesday with a view to signing for the team.

Lauren has a glittering past, playing for Arsenal, Reading, Cardiff City, Team Bath and Bristol Academy. Lauren represented England at U17 level, but switched her allegiance to Wales and won 11 caps for the U19 team.

She was called into the Wales senior squad in March 2004 for that year's Algarve Cup while still a 15-year-old schoolgirl player with Reading. She made her international debut against Finland on 20 March 2004.

Wells also represented Great Britain at the World University Games, playing in the 2009 tournament in Belgrade and winning a bronze medal.

Head Coach Rich Sears said, "Without a doubt it will be a major coup for the squad if we can land the services of Lauren for this season".