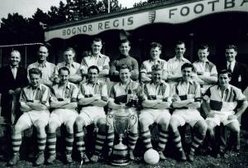 Bognor F.C. were founded in 1883 and the club became founding members of the West Sussex Football League in 1896, joining the Senior Division. They won the championship of this league for five successive years in the early 1920s, after which they joined the Brighton & Hove District League in 1926. Just one year later, however, they joined the Sussex County League where they were to remain until 1972. The club became Bognor Regis F.C. in 1929 after King George V added the suffix 'Regis' to the seaside resort.

The club won the Sussex County Division One championship in the 1948–49 season. At the end of that season, they added "Town" to their name so as not to be confused with the local rugby club.

At the end of the 1969–70 season they were relegated, but won Division Two at the first attempt. The club won the Division One championship title the following season and were promoted to Division One South of the Southern League. In 1972–73 they reached the first round of the FA Cup for the first time, losing 6–0 at Colchester United. In 1976 Jack Pearce became manager at the age of just 26, and went on to hold the position until 2007.

In 1981 the club were transferred to Division One of the Isthmian League, and were promoted at the end of the 1981–82 season after finishing second. In 1984–85 they reached the first round of the FA Cup again, beating Swansea City 3–1 in a replay after a 1–1 draw at the Vetch Field. In the second round they lost 6–2 at Reading. They reached the second round again the following season, beating Enfield in the first round, before losing 6–1 at Gillingham. They went on to reach the first round again in 1986–87 (losing 1–0 in a replay to Slough Town) and 1987–88 (losing 3–0 at home to Torquay United). In 1988–89 they beat Football League opposition again, defeating Exeter City 2–1, before losing to Cambridge United. In 1991–92 Bognor finished in the relegation zone, but were reprieved after Dagenham and Redbridge Forest merged. However, the following season they finished bottom of the Premier Division, and were relegated to Division One. In 1995–96 they reached the second round of the FA Cup for a fourth time, before losing 4–0 at Peterborough United.

In 2002–03 they finished second in Division One South, and were promoted back to the Premier Division. After finishing tenth the following year, the club were placed in the newly established Conference South. They were relegated back to the Isthmian League Premier Division at the end of the 2008–09 season, and were relegated again the following season.

Season 2010–11 saw the club compete in the Isthmian League Division One South and they missed out on promotion back to the Premier Division by the tightest of margins. Having finished with a club record total of 96 points, they lost out in the title race to Metropolitan Police on goal difference by just one goal, having led the table by two points, going in to the last fixture. As a result, they found themselves having to participate in the end-of-season play-offs, where they lost at home to Dulwich Hamlet who had finished 31 points behind. Revenge was sweet, however in the 2011–12 they again finished second in Division One South. They won the end-of-season play-offs, defeating Godalming Town in a thrilling semi-final, before beating Dulwich Hamlet 1–0 in the final, and thus gaining promotion to the Premier Division.

The 2012-13 season saw them finish in 14th place in the Ryman Premier. The 2013-14 season started slowly with just one point from the opening four matches. However they soon rose up the table, eventually finishing in third place and qualified for the end of season play-offs, although this ended in defeat in the semi-final at home to Lowestoft Town.

Season 2015-16 saw them miss out on the Ryman Premier title by one point and then lost in the play-offs to Dulwich Hamlet. They did however, also enjoy their best ever run in the FA Trophy by reaching the semi-finals. They beat a number of teams from higher divisions along the way, including Bath City, Maidstone United, Altrincham, Sutton United and Torquay United. But hopes of an appearance at Wembley Stadium were dashed when they were defeated in the semi-final by Grimsby Town, losing 1-0 in the first leg at Nyewood Lane, before also losing the second leg 2-1 at Blundell Park (3-1 on aggregate), despite putting up spirited displays in both legs.

Season 2016-17 saw them finish in second place for the second season running, but this time they triumphed in the play-offs, beating Wingate & Finchley in the semi-final, before victory over Dulwich Hamlet in the final, to win promotion to the Vanarama National League South for season 2017-18

Season 2017-18 unfortunately saw the club relegated back to the Isthmian League, with last season being one of consolidation and a mid table finish. However the season did at least bring the excitement of winning the Sussex Senior Cup for the first time in 32 years in May at Brighton's Amex Stadium, with a 2-1 win after extra time against Burgess Hill Town.