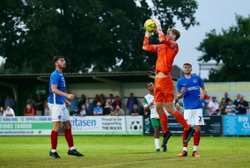 Bognor boss Robbie Blake hopes to be able to take keeper Toby Steward and attacking midfielder Alfie Bridgman on loan from Pompey -- with both set to be involved for the Rocks tomorrow night in the pre-season friendly at home to Worthing.

Steward, 17, impressed in goal in the 2-0 win at Horndean in a pre-season friendly on Saturday after playing against Bognor for a young Blues side in a 1-1 draw midweek.

Bridgman, 18, was on loan at the Nye Camp last season and his spell with the club was a huge success. Fratton Park boss Danny Cowley has indicated that he is happy for the pair to join Blake's men.

"Both players will feature against Worthing and we hope to be able to confirm loan moves thereafter," said Blake. "Toby looks a great prospect, looks very assured for his age and Alfie has developed really well since we had him with us last season.

"We have a great relationship with Pompey and we are very grateful to Danny and the club for all of their help."