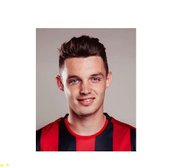 Portsmouth-born Dinsmore, 19, joined the Cherries in 2012 and has worked his way through the development centre and academy ranks before penning his first professional contract after completing his two-year scholarship at the end of 2018/19.

He has trained with his new Nyewood Lane team-mates and now goes straight into the squad for the home game against Bishop's Stortford on Saturday.

Rocks general manager Simon Cook said: "We're delighted to have Tom with us and we welcome him to the club."

Meanwhile, Cook has explained that the canopy structure at the ground that was wrecked by Storm Ciara -- and led to the Sussex Senior Cup quarter final tie against Brighton being postponed -- has been made safe.

The Albion match now takes place this Wednesday, Februrary 19 and means the away trip to Horsham has been re-arranged for Tuesday, March 10.