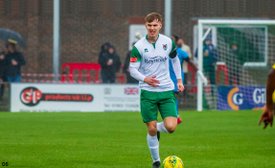 Joe commits ahead of August kick-off

Influential defender Joe Cook has handed the Rocks a big boost by penning a new deal to stay at Nyewood Lane for another season.

Cook joined Bognor from Havant & Waterlooville last year following a loan spell at the club. Now he has agreed to commit to another season and is seen as yet another vital component in the squad being assembled by Rocks bosses Jack Pearce and Robbie Blake.

Pearce said: "It's good to have Joe with us again for next season. He's a very assured central defender who we think will continue to develop and get better and better. We're delighted he has signed a deal with us and look forward to working with him again."

The news comes on the back of a clutch of new deals with players such keeper Amadou Tangara, skipper Harvey Whyte, defenders James Crane and Joe Hancott among those who will be in the squad when the new season kicks off in August.

And more signings will follow, says general manager Simon Cook. He said: "Jack and Robbie are working diligently, talking to players and we are making real progress. It's fair to say we will soon have more good news for supporters in regards to retaining players and recruiting as well."

Meanwhile, Cook issued an update on off-the-pitch activities at the Nye Camp and revealed an upsurge in demand for season tickets.

He added: "We have confirmed that we are carrying over all season tickets from last season to cover the 2021-22 season as a thank you to supporters and we were blown away last year by a huge jump in numbers from just under 100 season tickets in season 2019-20 to almost 150 in 20-21 season.

"However, we have been amazed and delighted by the continuing interest, with almost a dozen new season tickets purchased in the past week alone and a number of existing season ticket holders sending generous donations to the club in lieu of having to purchase a new ticket for the coming season."