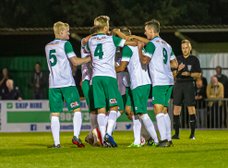 Dandy and Tuck back for Rocks

Joe Dandy has overcome the sickness bug that laid him low last week and is back in the Bognor squad heading to Wingate & Finchley tomorrow (Saturday) for a BetVictor Premier Division clash.

Central defender Dandy, 18, spent some time with the Rocks last season before a knee injury cut short his spell at the club. Now he is back to full fitness and is an addition to the travelling party that will bolster the backline.

Bognor bosses Jack Pearce and Robbie Blake go to London in a bid to notch a first win of the season after a defeat at Bishop's Stortford on the opening day of the campaign and a midweek draw with West Sussex neighbours Horsham.

The 1-1 draw with the Hornets came thanks to a second-half wonder strike from marksman Tyrell Mitford, formerly of Winchester City, and he must stand a good chance of making the starting line-up at the Harry Abrahams Stadium. Midfielder Doug Tuck is also back in the squad after missing the game against Horsham with keen observers suggesting the Rocks missed his link-up play.

Pearce is buoyed by the return of both Tuck and Dandy but although optimistic has asked his charges to try to hit the ground running following sluggish starts in previous matches.

He said: "It's obviously very pleasing to have Joe and Doug back with us. You can never have enough good players in your squad and this is certainly the case with both of them. Although we only have one point on the board from a possible six, there have been certain passages of play from us that have been very pleasing. The challenge now is to get off to better starts than we have done, defend better and try to take our chances when they come along.”