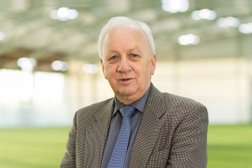 Jack Pearce steps down as manager

Rocks chief Jack Pearce has stepped down from his role as first team manager -- and handed the reins to Robbie Blake, who will boss Bognor with Jamie Howell as his assistant.

Pearce, who has been at Nyewood Lane as a player, manager and administrator for an incredible 52 years, is expected to stay at the club to help shape exciting plans for the future.

Bognor host Cray Wanderers tomorrow in the Isthmian premier division and the long-serving gaffer has handed the duo the baton to be in charge of team affairs.

Ex-Premier League striker Blake joined Bognor as first team coach in the summer of 2018 after a stint as a coach at Portsmouth under the then manager Paul Cook.

The news came at a fans' forum at Seasons, Nyewood Lane tonight when Pearce addressed around 80 supporters who had gathered to quiz club bosses open the pan s for the club both on and off the pitch.

Pearce, who began his playing career at the club in 1970 and first took up first team manager's role in 1976, said: "I'm 73 and old, but I've never lost my enthusiasm to want to make people play football. That is the only pleasure I get any more. I'm the vice chairman of the FA, I'm the chairman of the National League and I'm a director of the Football Foundation -- and the job I best enjoy doing is managing Bognor Regis Town Football club... and that's the job I've just given up."