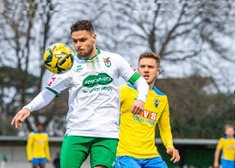 The Nye Camp skipper is keen to find his form again after a spell on the side lines through injury – and he hopes his on-field presence can add to the team spirit in the camp to bring a string of decent results in what has been an inconsistent campaign so far.

Long-serving Whyte, 31, who joined from Havant & Waterlooville 12 years ago, is seen as a vital component to engender positivity in the ranks. But the industrious midfielder, who can also operate as a full-back, says the captain’s role is more about helping his team-mates and doesn’t necessarily have an impact on his own displays.

Whyte believes Blake’s young squad is maturing and that this will hopefully lead to an upsurge in results, adding: “It’s clear that we have a young squad and we all know it can take time for young squad to reach consistently high-performance levels on a weekly basis.

“One thing we can definitely work on is not conceding goals so easily because that has obviously been an area of some concern and doing this is the first step. We have scored some quality goals and we really are not that far away.”

Meanwhile, the fans’ favourite has an eye on overtaking the appearance tally of his good friend James Crane, who recently left Bognor for Horndean after playing more than 500 games. In the short-term, though, his focus remains on helping the Rocks improve all round.