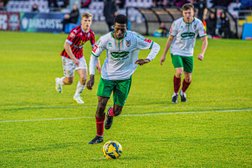 By Carl Eldridge
4 days ago
Share via
FacebookTwitter
https://www.pitchero.com/clubs

Young striker making his mark with the Rocks

Chichester University media students BEN FARRELL and RILEY DOUCE caught up with Nathan Odokonyero, Bognor’s 19-year-old forward, who is the club’s leading scorer so far this term. Here, we reproduce their work – if you are a budding journalist and want to see your words featured, get in touch…

Nathan started playing for Bognor in August of 2021 after his move from Lincoln U18s. After turning down a third-year scholarship at Lincoln City, Nathan decided that he wanted to play men’s football and said that his agent “recommended Bognor Regis” to him because he felt that “they were a good ball playing team,” that were “heading in the right direction.”

At the young age of 19 Nathan has had an electric start to the season and has put his good form down to “how well the team have been playing” and that the number of good chances Bognor have been creating has allowed him to be in the “right place at the right time” to finish the chances. When asked about how it feels to be such a crucial player for the team at such a young age Nathan responded by saying that, “it’s a great responsibility to have, which I like because I love being able to help the team in tough moments.”
He went on to praise the team's overall mentality during games and said that “we’ve had to come back from losing positions a few times to grind out a result,” which he said showed the “character of the team, and that no one hides in tough situations.”

Nathan has received a lot of praise from manager Robbie Blake this season and has said that working with Robbie has been “great” and that the advice he gives is “invaluable.” Having said that Robbie’s advice has helped him improve his “all-round play,” Nathan also believes that due to the manager’s “experience” and “encouragement” Bognor can aim for promotion this season and that if the team continue to play well the squad can achieve “great success”.

As for Nathan’s own personal goals he said that he hopes to “keep helping the team as much as possible, whether it through goals or assists” and said that he is aiming for “25 goals this season”. Believing that Bognor’s performances this season should justify a higher position in the league, Nathan said that with the “encouraging” atmosphere at the club and perseverance of the players the team could start turning good performances into better results.

If Nathan continues his form throughout the rest of the season, then Bognor have a great chance of elevating their current position in the table.