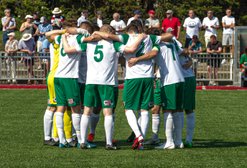 Rocks general manager Simon Cook says he is delighted with the news that the club have been awarded a £750 Stay in the Game grant from the The FA.

The Nyewood Lane outfit have been awarded a grant from the cheme to help aid the club’s retention of its adult male players, giving them the financial support to cover the costs incurred by grassroots clubs.

The Stay in the Game scheme is funded by The FA and delivered by the Football Foundation, with grants of £750 awarded to existing clubs in order to boost financial sustainability and allow clubs to continue offering playing opportunities in organised football.

The grants can be used towards matchday and training facility hire and league affiliation costs as well as covering match day subs for individuals that aren’t able to afford their regular match fees.

And Cook said: "We're absolutely thrilled to be the recipient of a grant rom the FA and we thanks them and the Football Foundation. We're aware that the push to sustain adult male teams follows the recent Grow the Game funding scheme for 2019, which made £1.5 million available for grassroots clubs looking to create new women and girls or disability football teams.

"As well as Grow the Game, the Football Foundation uses investment from the Premier League, The FA and the Government, through Sport England, to provide enhanced sporting facilities across the country. Since 2000, the Foundation has supported over 16,500 grassroots projects worth more than £1.5bn."