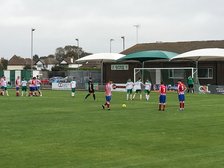 Rocks U19s suffered opening day misery as they went down to a 4-0 defeat at the hands of an impressive Dorking Wanderers side at Nyewood Lane this afternoon (Wednesday).

The Chichester College-based outfit never got out of the traps and lacked rhythm, purpose and cohesion. But to their credit they never wanted for endeavour and fought to the last minute in the first Under-19 Alliance league game of the season.

With five key players unavailable, coaches David Daniel and Paul Hinshelwood were forced to draft in some new faces for the outing and the lack of familiarity within the ranks showed. It didn't help the cause that the young Bognor side came up against a strong Surrey team who were rarely in trouble as they went about their business with a passing-game full of zip and efficiency.

Josh Wells opened the scoring on 22 minutes when he stole in to slot home from a corner and the visitors were 2-0 up with five minutes of the first half remaining when Lucas Fisher cashed in on home keeper's Oliver Howley's error.

The second half saw Bognor try to be more resolute in possession but try as they might they just couldn't engineer cohesive passages of play against a hard-working and hungry Wanderers outfit. Midfielder Jamie Carroll saw plenty of the ball but seemed out of sorts and struggled to recreate his form from last season, while Brad Higgins-Pearce showed only glimpses of the commanding performances for which he is known (in fairness to him, he played the night before in Selsey's 3-0 SCFL Division One defeat at home to Littlehampton Town and, understandably, looked fatigued).

Oliver Cook's desire was admirable and he put in a shift brimming with energy and enterprise but, again, industry rarely wins over ability and with a measure of continuity lacking his tireless efforts came to nothing.

The visitors had togetherness in abundance and no lack of guile but had to wait until 10 minutes left before Lewis Minter headed home after a sweeping move. And George Benbrilera sealed the victory with another headed goal at the death.