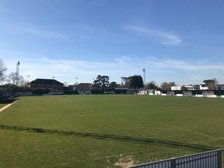 Bognor have unveiled ambitious plans to modernise Nyewood Lane -- with a new 367-seat grandstand the biggest improvement amid the exciting developments.

The plans also include a new covered area behind the goal at the Seasons end to replace the cover destroyed by Storm Ciara; new floodlights; a new PA system and a new toilet block at the Sports Club entrance.

Boss Jack Pearce and general manager Simon Cook hope the planned work can be completed ahead of the new season but the timing of the construction may now be hampered by the coronavirus crisis that brought the BetVictor Premier Division campaign to an abrupt, null-and-void conclusion.

And Cook said: "Quite simply they are the most ambitious plans in the club’s history and will greatly enhance our supporters’ experience at Nyewood Lane. The developments will further enhance the facilities, with the majority being planned for this summer.

"Funding for these would come from external sources such as The Football Foundation and the Football Stadium Improvement Fund as well as from the club’s own funds. A large part of the club’s contribution towards these costs would come from the Executive Club but this would leave an amount still to be found by the club – originally budgeted for, but obviously looking more challenging at the moment."

- New grandstand for 367 seats, include a dedicated disabled section. This will be raised and have excellent sightlines with a cantilevered roof and therefore no obstructing pillars. This will replace the two outdated seated areas which seat 354. The new stand is designed so that it can be extended in future to 500-plus seats if required. Planning permission was submitted last week.

- New covered area behind the goal at the Seasons end to replace the cover destroyed by Storm Ciara. This will be built to a much higher specification compared to the original cover and be guaranteed to be able to withstand significantly stronger storms.

- New toilet block at the Sports Club entrance to the ground

- New PA system throughout the ground

Cook added: "These are obviously very ambitious plans but are designed very much with the long-term, sustainable future of the club and the comfort of our fans in mind. In addition, we will also be undertaking pitch renovation – one advantage an early finish to the season is that we have longer to work on the pitch.

“This will allow certain treatments that we would not normally have time to do in the limited time available which will further enhance the quality of our playing surface. And there will also be a training area upgrade."

The news comes as the club revealed the launch of fundraising initiative in the wake of the Covid-19 pandemic. Cook said: "Since the start of the coronavirus crisis, we've been approached by many supporters wanting to know how they can donate at a time when revenue has completely dried up. Coronavirus has compounded the already challenging financial situation when constant wet weather wiped out many home fixtures, and revenue. These fixtures will not of course now take place. Fortunately, the club has continued to manage its finances very carefully over the years and has no debt.

"Initially, whilst extremely touched and grateful for the concern being shown by supporters, we did not initially feel that we should be asking for money at a time when the issues facing football pale into insignificance compared to what so many are facing. However, supporters of the Rocks are nothing if not persistent, and the desire to contribute has grown with a number of ideas put forward to us.

"These have included: donate what you would normally spend each week/month on your football fix; one-off donations; joining the Executive Club, which really benefits the club. There are currently around 125 members who contribute £10 per month by standing order. This raises some £15,000 per year, half of which is paid back in monthly prizes to the lucky winners, with half being retained to be spent on ground improvement projects. There are four prizes of between £25 and £1,000 per month.

"This scheme has been operating for many years and the proceeds have always been ring-fenced to be spent on ground improvements. The balance currently stands at around £60,000, but the more members, the more this will rise each month."

*Fans who would like to contribute can do so knowing 100 per cent of their donation will go towards the plans mentioned above. There are two ways in which donations can be made: By using this funding page.

Or, a direct bank transfer to

By using this reference, the club can easily identify and allocate your donation.