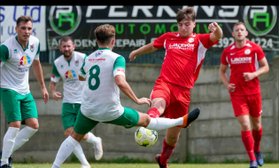 Bognor had some new faces in the line up as they arrived at Five Heads Park in their next friendly fixture. Chris Clark was in goal for the absent Amadou Tangara, whilst Jordy Mongoy was missing through illness. Joe Hancott, Gavin McCallum and Harvey Whyte watched the action but are soon to return to action in the coming weeks.

Early on Jake Flannigan did well to cross it from the right but his cross to Jason Parish saw him denied his headed chance thanks to a defender on the line. Then Kayne Diedrick-Roberts made a run inside but ran out of room before he could get a cross in.

Ashton Leigh struck wide after Bognor defenders closed down Horndean down he other end as action was happening at both ends.

Flannigan pulled up with a groin strain off gge ball and had to be replaced by Joe Cook after only 10 minutes.

Charlie Bell struck one at goal from outside the box. The goalkeeper pushed it out to Parish who skied it from 5 yards out.

A cross from James Crane was attacked by Parish but he fouled the goalkeeper. Crane hit one from out wide but it was stopped from distance.

Bognor took the lead on 26 minutes. Leigh's driven low corner was deflected into the path of Parish who prodded it low and under the goalkeeper.

Bognor had another chance when new triallist Tyrone Madhani crossed the ball to Parish and his header only just flashed over.

There was more joy for Bognor as Joe Cook got them on the counter attack. Then a ball through the middle to Parish saw him run around his marker and from tight angle slotted it in on 36 minutes to extend the lead for Bognor.

Another triallist Odokonyero did well to hold the ball up before Madhani got hold of it, running across defence before shooting low and hard and just wide of the right post.

An inspired Joe Dandy, did well to round his marker on the right before crossing to Odokonyero, whose quick header was denied by the goalkeeper.

Dandy crossed the ball again from the right which bounced out to Diedrick-Roberts who hit it first time but agonisingly wide.

Though Bognor got a third goal on 69 minutes when neat build up allowed Odokonyero to rush inside from the right before hitting the ball sweetly into the bottom left corner to cap off a fine debut.

But Horndean continued to battle and did get a goal back on 86 minutes, netting from close range as appeals for a handball were ignored from Bognor in the build up.

With the Portsmouth game now cancelled due to COVID protocol rules originally planned for Wednesday 28 July, Bognor's next game sees them welcome Dorking Wanderers to Nyewood Lane on Sunday 1st August 3pm kick off, hoping to continue to build a side for the new season ahead.