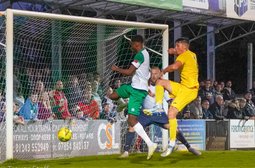 Bognor aces Jordy Mongoy (2) and Kayne Diedrick-Roberts netted in a 3-0 win in the final pre season friendly game for this 2021/22 campaign.

A fighting display from Darin Kilpatrick and Miles Rutherford's Chichester City with an exciting young side made the game harder for Bognor. But the Rocks were just too strong in the end.

An early cross by Gavin McCallum saw Jason Parish lose control of the ball inside the penalty area.

Matt Axell clashed with Jordy Mongoy in a 50/50 challenge and he was holding his shoulder after the incident whilst received treatment.

McCallum was strong enough to hold off his marker before shooting low but it was saved by Ryan Young low to his left.

Ashton Leigh burst into the box before being tripped in the area and the linesman flagged straight away for a penalty. Leigh stepped up to shoot low towards the bottom corner but it was pushed away by Young on 7 minutes, keeping the game goalless.

Mongoy won a corner kick off Ethan Robb's ball out wide. Leigh's corner was headed out though.

Joe Dandy did really well to play the ball inside to McCallum who ran across defence before shooting narrowly high and wide on 14 minutes.

Soon after Charlie Bell did well to play it forward to Parish who neatly squared it to McCallum who cut inside dangerously and smashed narrowly over the bar from the edge of the box.

Parish gave away a freekick out wide on the left but the high cross was gathered well by the towering Amadou Tangara in the box.

Joe Cook surged forward before shooting another effort from distance. The ball bounced narrowly wide of the right post on 29 minutes.

Mongoy found Leigh on the left before his low cross was stopped by Young as the match passed the half hour mark.

Gicu Iordache did well to dig out a cross down the other end, finding Callum Overton who glanced a header well wide from inside the box on 36 minutes. But the linesman had his flag up for offside so a goal would not have counted.

Leigh's corner on 38 minutes curled onto the head of a rising Craig Robson who, under pressure in the air, headed over. Mongoy then sprang down the left before beating his man and crossing wonderfully into the area but the bounce beat Parish who knocked it over from 8 yards out.

Davies did well to work his way into the area. He went to ground but was ignored claims for a penalty. But Parish was also clipped in the area straight after this and the referee pointed straight to the spot. Up stepped Mongoy who took his penalty well on 43 minutes, smashing it high into the net to give Bognor a deserved lead.

Robb stole the ball from a wayward clearance before finding McCallum with a pass forward. He turned and smashed it low instantly but it was well saved by Young.

Mongoy had strayed offside when he stuck wide from a left sided cross on 52 minutes.

Dandy's low bouncing cross was searching for Mendoza but the defender got there first.

Dandy slipped when he tried his cross from the right. Then another dangerous cross by Dandy bounced up off Lewis Hyde onto the right post and back out again off the goalkeeper and somehow cleared on 62 minutes.

The last subs came on for Bognor as Robson, Davies and Dandy made way for Jake Flannigan, Chad Field and Joe Hancott on 63 minutes.

Mendoza dug out a cross deep onto the back post with Mongoy waiting but he was put under pressure before it was deflected wide. Down the other end Ethan Pritchard shot wide before having to come off for Jo Masters on 70 minutes.

Madhani did well to run across the defence before passing square to Mongoy who struck it low but his chance failed to trouble Young in the Chi goal.

Tangara did reach a cross but it bounced out of his hands but Flannigan dealt with the loose ball to clear it.

Bognor got their second goal when Mendoza's ball forward to Diedrick-Roberts saw him stay composed, before beating Young with a fine strike, looping it into the net on 75 minutes.

Phil Brown played the ball out wide to Mongoy who cut inside with pace and fired at goal. Young had to push it over with both hands over the bar on 79 minutes.

Cook went down off the ball and had to be rolled off for Dandy,who had come off earlier in the game, on 82 minutes as Charlie Oakwell also replaced Kaleem Haitham for the visitors.

Overton did well to beat his man before smashing it with his left foot off the upright and back out on 87 minutes in a rar chance for the visitors.

Brown did well to get into space in the Chi half before shooting from distance but unfortunately wayward.

Another goal for Bognor came right at the death. A pinpoint cross by Flannigan found Mongoy with a simple tap in from the heart of the box on 90 minutes to end a comfortable evening at Nyewood Lane.

It's now time for Isthmian Premier League to start again and Bognor’s first game sees them take on Bishop's Stortford at Nyewood Lane on Saturday 14 August, 3pm kick off.